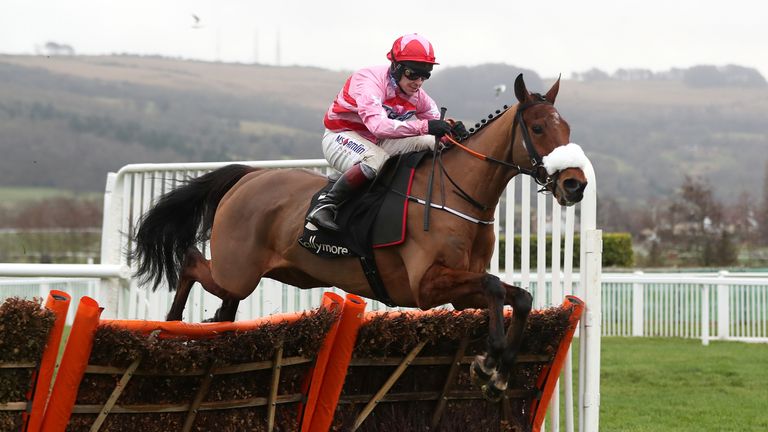 At The Races presenter Vanessa Ryle analyses every runner and gives her selection for Thursday’s Aintree Hurdle at the Grand National Festival.

The Grade One Aintree Hurdle is the premier middle-distance hurdle race of the season and provides the perfect opportunity for the Champion Hurdlers to step up in trip and, from the race’s inauguration in 1976, it has seen many top-notch two-milers do just that.

In recent years, Champion Hurdlers Jezki, Annie Power and Buveur D’air have all stepped up in trip and scored in the contest and, although this year’s renewal does not include the star hurdler of our time, Honeysuckle, the race still looks to be based around her Champion Hurdle victory and the result may well boost her form further.

Olly Murphy’s nine-year-old contested this race 12 months ago and never really looked like getting into the contest, finishing only fifth, and he is yet to prove himself in Grade 1 company.

Since returning this season following on from a wind operation he has added two more wins to his tally, including over the course and distance at the start of the season, but perhaps his best performance was when joining the dots in the Relkeel Hurdle, which he looked like winning when falling at the last.

This has been his big target for the spring, and probably the whole season.

Having been on the go since mid-September, Tom Lacey’s gelding has climbed the ranks from a handicap hurdle at Plumpton off 130 to being beaten less than 10 lengths by Honeysuckle in a Champion Hurdle.

Officially he has improved 24lb over the course of the last seven months and in that time managed to chase home Epatante in the Christmas Hurdle at Kempton and also won the competitive Betfair Hurdle at Newbury.

However, his one disappointing run of the term came when he was tried over the trip for the first time at Newbury back in November and he didn’t look to appreciate the extra distance, so a question mark still remains over whether he can prove to be Grade One standard at this distance.

On official ratings and all known form, Nigel Twiston-Davies’ six-year-old would need to find significant improvement to feature in this contest but he is one of the confirmed stayers at this trip.

When he was last seen at Fontwell, finishing behind Brewin’upastorm, he didn’t have the clearest of runs through and a sloppy jump at the last meant he was beaten further than he should have been.

He ran in the Mersey Novices’ Hurdle 12 months ago, managing to finish in the placings at a big price, and there could easily be a repeat over the course and distance if others fail to fire with question marks in regards to the trip.

One of two runners in the race for Paul Nicholls, he was due to run in the Coral Cup at Cheltenham only to be withdrawn on account of the rain-soaked ground.

The champion trainer has now decided to go a different route by upping the eight-year-old into Grade One company again. He contested this race in 2021 and, in similar fashion to Brewin’upastorm, he put in a below-par performance to finish down the field.

A summer off and an extended break saw him start back in January with a promising run but the experiment of upping him to three miles when we last saw him didn’t work and now he returns to his preferred trip.

He is a fresher horse than many coming into this race and although he doesn’t always look the easiest of rides he remains a horse with a huge amount of ability.

The five-year-old has followed a well-trodden path having been an excellent and unbeaten juvenile last term, only to step up into open hurdling company this season and the wheels to have slightly come off in his two starts back.

Similar to stablemate McFabulous, he is very lightly raced this season due to an injury he picked up on his reappearance in the Fighting Fifth in November.

He would be entitled to come on fitness-wise for his run at Fontwell when he finished behind Guard Your Dreams and, though unproven at the trip, he looks the type who will stay well, but it would be a huge training performance to get him back to his best at this point in the season in a race of this nature.

Gordon Elliott’s five-year-old has enjoyed a consistent first season at the top table in open company, running solid races behind Honeysuckle and Sharjah on all of his last four starts.

The best of those runs came when we last saw him at Cheltenham in the Champion Hurdle where he was beaten only by Honeysuckle and Epatante, giving both the mares allowance (7lb) in the process.

His running style suggests he will appreciate the step up to two-and-a-half miles for the first time and what’s definitely in his favour is that this isn’t anything like so hot a Grade One as those he’s faced previously in his career.

There are strong similarities to Abacadabras who won this for the yard (then managed by Denise Foster) last year.

Victorious in the 2020 Champion Hurdle, JP McManus’ mare brings the classiest level of form into the race. A five-time Grade One winner over two miles, she will now step up in trip for the first time in her career, at the age of eight.

Chasing home Honeysuckle in the Champion Hurdle was proof positive that she’s back to somewhere near her very best, having suffered a few niggling physical issues over the last year, but the question remains as to whether the trip will suit her.

She has always looked like a speedy, strong-travelling sort and wouldn’t be an obvious candidate to appreciate the stiffer test that awaits her at Aintree.

Hardly a vintage renewal of the Aintree Hurdle, and there are question marks over all seven competitors for one reason or another, but the bottom line is that, of the pair ahead of the rest on form, ZANAHIYR is far more likely to relish the new trip than Epatante.

There are strong similarities between Zanahiyr and last year’s winner, Abacadabras, who was likewise partnered by Jack Kennedy.